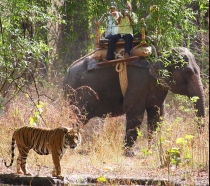 Bandhavgarh National Park experiences the North Indian Monsoon and has well-defined a winter and summer season.

In the summers which lasts from end March until end June, the temperature can go upto 44 C (111 F) in May / June. By mid-June the rains can start with very little prior warning.

Winters set in around mid November and last till the end of February. Visitors are forced to put on multiple layers as protection against the biting cold. Lows of 2 C (35.6 F) have been recorded with frost forming in the open marshy hollows. As the vehicles in which one moves in the park are open, it is advisable to wear very warm clothes because of the wind chill factor.

This Itinerary is 100% Customizable.


*Based on 3 Jeep safaris on sharing basis

A 3 Day Tiger Safari in Bandhavgarh National Park famous for highest known density of tiger population in India. Bandhavgarh National Park as an unspoilt national habitat for a variety of wildlife peculiar to the area. These includes gaur (Indian bison), sloth bear, leopard, porcupine, wild boar, sambhar and spotted deer, among others and of course, the Tiger. The Bandhavgarh national park is a jungle consisting mainly of sal trees. It is only in the slightly higher reaches that it changes to a more mixed vegetation of sali, saj, saja, dhobin etc. In the northern region of the park, there are vast stretches of grasslands and bamboo forests.

Met upon arrival at nearest railway station or airport and transfer to Bandhavgarh National park. Upon arrival check in at you lodge.

Bandhavgarh National Park is a park with a rich historical past. Prior to becoming a national park, the forests around Bandhavgarh had long been maintained as a Shikargah, or game preserve, of the Maharajas and their guests.  It has the highest density of Bengal tigers known in the world and is home to some famous named individual tigers. Charger, an animal so named because of his habit of charging at elephants and tourists (whom he nonetheless did not harm), was the first healthy male known to be living in Bandhavgarh since the 1990s. The female tigress called Sita, who once appeared on the cover of National Geographic, is considered the most photographed tiger in the world. The 105 km² of park area open to tourists was reported to have 22 tigers, a density of one tiger for every 4.77 km². (Population estimation exercise 2001). The population of tigers in the park in 2012 is about 44-49. There is a saying about the Park that goes: "In any other Park, You are lucky if you see a tiger. In Bandhavgarh, you are unlucky if you don't see (at least) one."

Overnight at the Jungle Lodge

Return for breakfast at the hotel.

Spend the day at leisure enjoying the facilities of the lodge. After Lunch get ready for another thrilling game drive.

Overnight at the Jungle Lodge

Return for breakfast at the lodge.

Thereafter check out from lodge and depart for your onward destination.

Our Choice Of Lodges, Camps & Hotels

You can also get an exclusive 3 Days Bandhavgarh Tiger Safari especially customized for you by our experts by just filling up the form below: