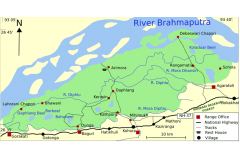 Kaziranga National Park is a well reputed National park of India. This secluded area of Assam has no shortage of distinct plants and animals. Due to which, in the year 1985 it has been nominated as one of the prominent natural World Heritage Site .It is located in the Golaghat and Nagaon districts of Assam, this National park came into existence from the year 1905 as a Reserve forest. It has achieved an increasing success and fame in wildlife conservation.

Positioned on the edge of the Eastern Himalaya biodiversity hotspot, the park takes into consideration high species range and visibility. This place is bliss for nature's lovers. It has a variety of natural biodiversity of worldwide value. It is the oldest park in Assam which covers a huge area of 430 Sq km. Big elephant grasslands, and impenetrable tropical moist broad leaf forest creates an ideal ambience for the sustenance of the wildlife.

The Kaziranga Game Sanctuary was given a new name the Kaziranga Wildlife Sanctuary in 1950 by P. D. Stracey, the forest preservationist, violation by humans along the margin also has led to a limited forest cover and a loss of habitation. The grand Indian One Horned Rhinoceros, the eastern swamp deer and Wild Asiatic Water Buffalo are the main attractions. Kaziranga is one of the small numbers of wild breeding locations outside Africa for multiple species of big cats, such as Indian Tigers and Leopards.

You can also get an exclusive Kaziranga National Park especially customized for you by our experts by just filling up the form below: