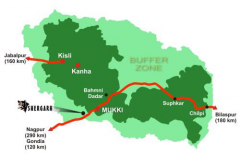 Kanha National Park is one of the best national parks of India and stretched across Banjar and Halon valleys within the Mandla and Balaghat districts of state of Madhya Pradesh.  This park is the only territory of the uncommon Barasingha (Cervus Duvaceli Branderi). In the year 1930s, the Kanha region was separated into two sanctuaries: Hallon and Banjar, of 250 sq km and 300 sq km each one. Although one of these was afterwards disbanded, the region remained a protected one till 1947. Reduction of the tiger populace in the years which followed led to the area had been made an absolute sanctuary in the year 1952. By a special statute in the year 1955, Kanha National Park came in to existence.

Since then, a sequence of stringent preservation programmes for the fortification of the park's flora and fauna has provided, Kanha it’s deserved standing for being one of the optimum and best administered National Parks within Asia, an appealing attraction for all natural wildlife lovers and a true shelter for its animal and avian populace.  A finely tuned attraction inside the Park is Bamni Dadar, popularly recognized as Sunset Point which offers the most overwhelming backdrop of the evening against grazing Sambhars and Gaurs, that magnifies the natural splendour of the whole area. The lowland jungle is a blend of sal (Shorea robusta) along with other diverse forest trees, interspersed with meadows.

The highland wooded areas are tropical, moist, dry and deciduous sort of a completely diverse natural habitats with bamboo on slopes (Dendrocalamus strictus). An extremely good looking Indian ghost tree (kullu) might also be seen in the opaque forest.

A 3 days short Tiger safari in Kanha National Park in the Mandla and Balaghat districts of Madhya Pradesh. The park has a significant population of Royal Bengal Tiger, leopards, the sloth bear, Barasingha and Indian wild dog. The lush sal and bamboo forests, grassy meadows and ravines of Kanha provided inspiration to Rudyard Kipling for his famous novel "Jungle Book. ...

A 4 Days Safari in Kanha National Park, one of the most beautiful and well managed of all national parks in India. It is well known not only within the tourists, natural history photographers and wildlife lovers but also to public at large. Tourist throng here to see the magnificent big cat Tiger and one of the rarest deer the Hard ground Barasingha (Swamp Deer) also known as the – Jewel of Kanha national park. Today Kanha is among the f...

You can also get an exclusive Kanha National Park especially customized for you by our experts by just filling up the form below: