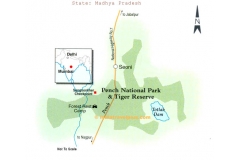 Pench National park, nestling in the minor southern reaches of the Satpuda hills is named after Pench river, winding through the park from north to south. It is situated on the southern periphery of Madhya Pradesh, bordering Maharashtra, in the states of Seoni and Chhindwara .In Pench, Sambar, Cheetal, Nilgai are usually seen grazing on the free land on roadsides and river banks & reservoir. Jackals are also seen in the park, which are in search of their food.

A group of 15 wild dogs can be seen along Chhedia, Pyorthadi, Jamtara and Bodanala areas of the Reserve. Herds of gaur can be marked near streams and bamboo patches regularly in summer months. Sloth beer occupies hilly, stony out crops and favor mahul bel polluted forest. Chinkara are rarely present and are mostly found near the open areas around Turia, Telia and Dudhgaon villages.

As per the physical structure and the study so far, the forest is found to be of Southern tropical dry deciduous teak and southern tropical mixed deciduous forest with other species of trees, climbers and shrubs.

A 3 Days Tiger Safari in Pench National Park which conjures up images of Mowgli, Bagheera and the "bear necessities". Immortalised by Rudyard Kipling in The Jungle Book, it is still sometimes unfairly given the step-sibling treatment next to Bandhavgarh. When, in fact, the Pench river meandering through its entire stretch, along with the open hilly terrain, teak forests and jungle streams form a heart-stoppingly beautiful landscape. A landscap...

A 4 Days Safari in Pench National Park also known as Indira Gandhi National Park is known for large population of chital and sambhar and has the highest density of herbivores in India. This is famous for large heards of gaur, nilgai and wild dog. The tiger, leopard, barking deer and chinkara found in large numbers along with over 285 species of resident and migratory birds. The area of the present tiger reserve has a glo...

You can also get an exclusive Pench National Park especially customized for you by our experts by just filling up the form below: