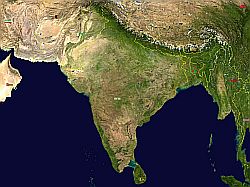 "India is the cradle of the human race, the birthplace of human speech, the mother of history, the grandmother of legend and the great grandmother of tradition. Our most valuable and most astrictive materials in the history of man are treasured up in India only!"

The above quote about India truly describes what India is all about. India, the country where you find a unique blend of cultures, castes and races with generous doses of tradition thrown in. What you get, is a pleasantly appalling, fascinating, mystifying land that almost everyone falls in love with. Just for your assistance, given below are certain quick facts of India that will help you analyse India at a glance.

Terrain : Himalayas in north, Deccan Plateau (upland plains) in the south, flat to rolling plains along the Ganges river, deserts in west.

Languages : Hindi is the official language. English is widely spoken and written. 17 major languages recognized by the Constitution and 844 Dialects.

National flag : Horizontal tricolor in equal proportion of deep saffron on the top, white in the middle and dark green at the bottom. In the center of the white band is a wheel in navy blue colour.

Passports and Visas : Valid passport and visa is required to enter in India. Visas cannot be issued on arrival. It is also essential that the passport should be valid for at least six months from date of entry.