The world-famous wildebeest migration is a sight to behold and has come to be known as the world’s most phenomenal wildlife event. Made possible by the geographical location of Tanzania’s Serengeti national park adjacent to Kenya’s Maasai Mara national park, both countries gain massively from the large number of tourists that flock the area during the spectacular event and all-year-round. Whether you visit the area during the Masai Mara safari or on any other event, there are great spots to camp and hotels to lodge in and experience the wildebeest migration at its very happening.

What makes wildebeest migration so spectacular is the huge number of wildlife that take part in this annual activity. Approximately 1.5million wildebeests are accompanied by about 200,000 gazelles and 400,000 zebras in this migration. This totaling to over 2million animals is quite a large number and looking at then would definitely take anyone’s breath away.

The wildebeest migration occurs in fairly predictable patterns throughout the year. The main aim of these migrations is to seek for fresh grazing areas and water that is better in quality. The movement is however greatly dependent on the rainfall patterns every year. Over the past ten years however, the trend has been seen as almost constant. In June, a huge herd of wildebeests and other grazers move to the Serengeti to calve. They stay in the Serengeti till the dry season leaves their grazing areas bare and are then drawn by the scent if the rains towards the north in July. This is the time the Maasai Mara safari gets underway and you need to book in advance for a chance to experience the world’s biggest wildlife spectacle.

Once the safari gets to the Mara river where the crossing from the Serengeti is, you will never forget the experience. Thundering of hooves will give a deep rumbling accompanied by low grunts to signal that the herd is almost in sight. Then you spot the first one, and then the next and they keep increasing till they are countless just in front of your eyes. Those that have experienced this use different words to describe. Some say the feeling is mesmerizing, others say it is stunning while others refer to it as simply amazing. In short, it is spectacular no matter what vocabulary one wants to use to describe it. From the one horizon to the other, a huge mass of wildebeests, gazelles and zebras approach the Mara making a picturesque view characterized by much black some white and a little brown color here and there. 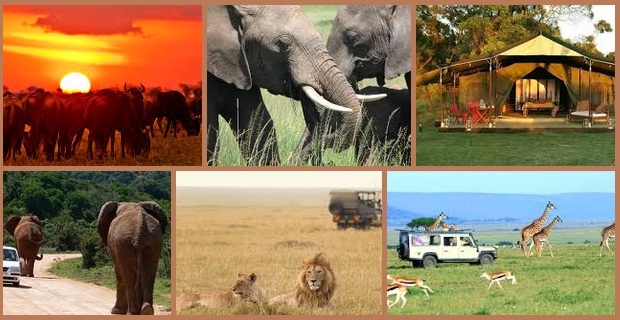 On crossing the Mara River, the crocodiles join the event grabbing the weak animals and having a great meal. The chasing that goes on as the animals cross the river can be quite hilarious giving a light moment during the trip. Some of the animals drown and are swept away by the waters of the Mara River too. The best part about being a part of the Maasai Mara safari is that you get a chance to follow the herds in their new territory and experience the grassland cycle firsthand.

The hungry predators targeting the animals are also great to watch out for ranging from lions to hyenas. The surviving ones will look for grazing areas and by September will have settled into the Mara enjoying the green pastures but in October the southward journey to the Serengeti begins where the grassland is more favorable then and the journey is repeated yet again.