Cultural & Heritage tours in India via the Earth Safari

India is one of the countries that is known the world over to have rich, incomparable, inimitable and intoxicating ancient heritage and culture in the Asian continent. The country boasts of great cultural practices, languages, architecture of ports, customs, palaces and monuments that showcase a rich culture & heritage, which has transcended over the centuries. The people of the Indian nation have sacredly preserved their culture and heritage that is vividly evident in their beautiful buildings and architecture, their religious practices and their cultural practices. If you have an interest in the culture and heritage of the Indian people, then here are six of the best cultural & heritage tours in India that you must know.

a) Cultural Tours in India

Due to the varied cultures in the country that vary with the regions, there are several cultural tours and sites in India which include;

It is a chariot shaped structure that is dedicated to Surya the Sun God. The temple represents the culture of the Konark people and is strategically located in the District of Konark in the bay of Bengal. Most importantly, the temple is a reflection of the marvelous architecture and the devotion of the ancient Indian culture.

The Chaatrapati Shivaji terminus in Mumbai is one of the historic sites in Mumbai.. It is the busiest railway in India that exposes a mixture of the Indian and British architecture.

b) Heritage tours in India 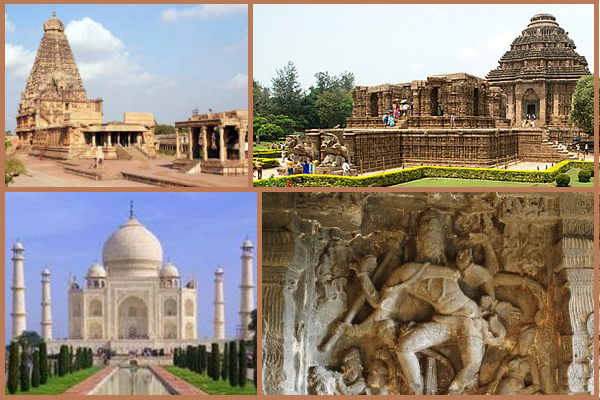 When it comes to heritage tours in India, there is a lot to be experienced from the grand monuments, heritage sites to quaint temples.

This is a UNESCO heritage site that is considered an important symbol of the India cultural heritage. It is one of the Seven Wonders of the World that was built in the 17th century using white stone that brightly shines to date. It is an epitome of love all over the world as it was built by an emperor who was truly in love with his wife.

There is a lot to be experienced in the desert state of Rajasthan. These include the royal palaces that manifest the history of the royal times. The Udaipur city is a magnificent city of manmade lakes that offers an incredible site and a tour destination. Finally, the Bishnoi village is inhabited by the Bishnoiclan that are an important clan to the Indian heritage.

The caves are 2000 years old and a proof of the Buddhist influence in India. This caves are easily accessible a small distance from the city of Aurangabad in Maharashtra. The caves were curved by the Buddhists thousands of years ago. Walls of the caves are plastered with incredible sculptures that tell the story of the Buddhist community.

These are only but a few of the best cultural & heritage tours in India. The country is endowed with hundreds of sites that have been identified by the UNESCO as cultural. The Indian culture is one of a kind that is heavily influenced by religion hence the many sites that are well preserved. This has offered a great opportunity for people from all over the world to learn and experience the Indian culture by visiting these sites.